Munich remembers the victims of the Oktoberfest attack

Commemoration of the Oktoberfest assassination in 1980

26 Sep
Every year on September 26, Munich commemorates the right-wing extremist attack on the Oktoberfest in 1980 with a memorial event on the Theresienwiese. Twelve people were killed in the attack and over 200 were injured, some seriously. The Oktoberfest Attack documentary provides permanent on-site information about the events. In 2022, this was expanded with new video clips.

Wreath laying and commemoration of the victims of 1980

The Oktoberfest attack on September 26, 1980 was the most serious terrorist attack in the history of the Federal Republic of Germany, with twelve people killed and over 200 injured. At the entrance to the Theresienwiese, the far-right perpetrator Gundolf Köhler detonated a bomb. For more than 40 years, the trade union youth has organized a commemorative event with wreath-laying ceremonies, which is supervised and sponsored by the cultural department.

Lord Mayor Dieter Reiter said at the commemoration ceremony on September 26, 2022: "The Oktoberfest attack was an attack on all of us. We must therefore work together to counter its destructive, right-wing extremist power: a democratic togetherness that leaves no chance for the division of our society. Our special responsibility is to those who were torn from their lives, seriously injured and traumatized in the Oktoberfest attack." 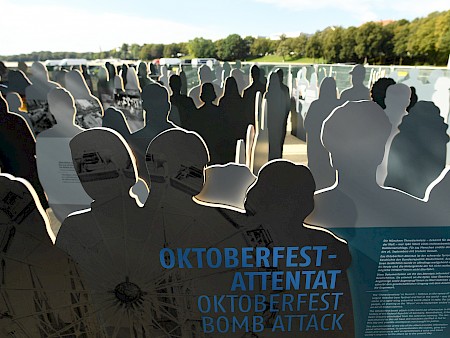 A memorial to the victims of the Wiesn attack has stood at the site of the explosion since 1981. The names of those killed were engraved on the bronze stele by Friedrich Koller in 1987. The site was redesigned in 2008 and expanded with a perforated steel wall.

The information site "Dokumentation Oktoberfest-Attentat" at the entrance to the Theresienwiese was developed by the cultural department together with survivors. Since 2020, 200 life-size silhouettes, illuminated in the evening, have commemorated the victims. Analog and digital images and texts convey information in two languages. Barrier-free access to the exhibition is possible around the clock with free admission.

New video interviews at the place of information

Since 2022, ten new video interviews with survivors of the Oktoberfest attack have been available in the documentation media station. In short video clips, ten contemporary witnesses share their perspectives. Around 50 excerpts provide insights into their experiences, divided into six topics, such as wounds and pain, but also hope and the future.

Cultural Affairs Officer Anton Biebl said of the new interviews, "I pay the greatest respect to the dedicated survivors for sharing their experiences with the public. Their haunting voices are a reminder. We must take better care of victims of right-wing violence, prosecute the crimes, educate comprehensively and remain vigilant."