An Oktoberfest farewell with loud bangs

The Wiesn begins directly after the tapping with firecrackers and ends traditionally 16 days later with plentifully roaring: 60 shooters on the steps of the Bavaria begin the farewell of the Oktoberfest 2019. Also present: plenty of Wiesn celebrities and Prince Wolfgang of Bavaria. 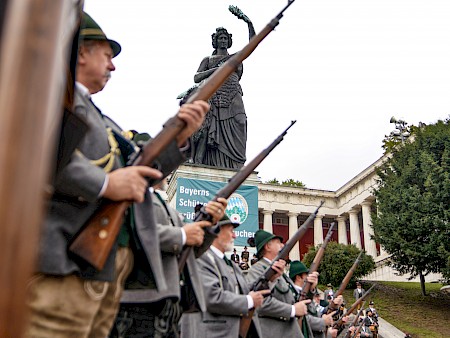 On the first Saturday of Wiesn, the firecrackers sound from the Bavaria over the Festwiese: O'zapft is! Only then are the tents allowed to start serving beer. And what begins with a loud bang ends as conclusively as it does traditionally, neither quietly nor quietly: On the last Wiesn Sunday, 60 shooters fire their firecrackers on the steps under the Bavarian patron. With black powder and lots of white smoke - not only an acoustic earpiece, but also an optical spectacle.

The kings of the "Oktoberfest Landesschießen", which takes place every year at the shooting ranges of the Schützenfest tent, are honoured with the salute shots.

This year, among others, Minister of State Hubert Aiwanger, the second Mayor of Munich Manuel Pretzl and Prince Wolfgang of Bavaria were present. And at the end they sang along to the Bavarian anthem.

What a beautiful noise! The video