For decades, the police, fire brigade and paramedics on the Oktoberfest have been supported by emergency forces from abroad. On Sunday, the festive leader Clemens Baumgärtner welcomed the colleagues from Italy, France and Austria in front of the Bavaria and thanked them for the good cooperation. And there was even an anniversary to celebrate... 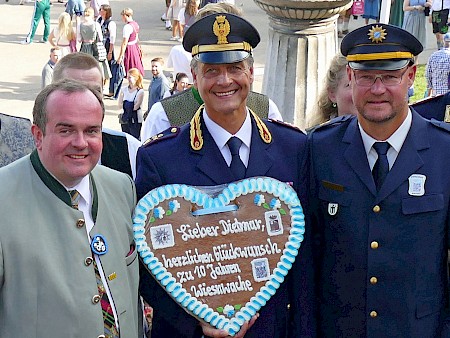 A valuable aid for the police, fire brigade and ambulance service

"You are a very valuable help to us every year, please come back again and again", Oktoberfest boss Clemens Baumgärtner thanked the employees of the foreign authorities, who actively assist the Oktoberfest guards of the police, the professional fire brigade and the Aicher ambulance. As a sign of gratitude and appreciation, he presented them with this year's Oktoberfest mug in bright sunshine. Even the Italian Consul General of Munich had come to the photo session in front of the Bavaria...

Foreign support has a long tradition

And one colleague even received a personal award - Dietmar Angerer of the Quästur Bozen supports the Oktoberfest guards for 10 years. Therefore he got a huge gingerbread heart and special thanks from Clemens Baumgärtner. The Polizia di Stato Bozen and civil servants of the Carabinieri Trentino from Italy have been at the side of their German colleagues for the past 15 years, which Oktoberfest guard leader Christian Wittstadt praised. At this year's Oktoberfest, 12 helpers from these regions will be on site. They are assisted by police officers from France, colleagues from the professional fire brigade of Bolzano and paramedics from Austria.

The deployment of uniformed policemen from abroad at the Munich Oktoberfest has become a tradition. Especially on the second weekend - the unofficial "Italian Weekend" - Romanesque language skills are very helpful for the Wiesn guard!

You want to know what's going on at the Oktobferst police office? The police gave an insight in a Twitter marathon