Roland Hefter, Clemens Baumgärtner and Monika Gruber for a good cause

After the Wiesn jug was sold out so quickly, the "Koa Wiesn" shirt is now available for a good cause. Here you can find out where all the proceeds will go and what the t-shirt looks like when worn by German comedian Monika Gruber...

All proceeds will be donated

In cooperation with the Munich singer-songwriter and city councillor Roland Hefter, another fundraising campaign has now been created in addition to the "Koa Wiesn" jug, namely the "Koa Wiesn" shirt. In Bavarian dialect, "Koa Wiesn" means simply "No Oktoberfest". The T-shirt features Munich's symbolic figure, the Münchner Kindl, along with the signature "Schau ma moi, dann seng mas scho!" - a well-known saying in Bavarian dialect, which roughly translates as "Let's see what the future brings", but with a positive vibe. The whole thing was designed by the well-known illustrator and caricaturist Dieter Hanitzsch.

The net proceeds will be donated in full to the Münchner Tafel and the association "Ein Herz für Rentner".

You can buy the t-shirt exclusively in the official Wiesnshop at store.oktoberfest.de 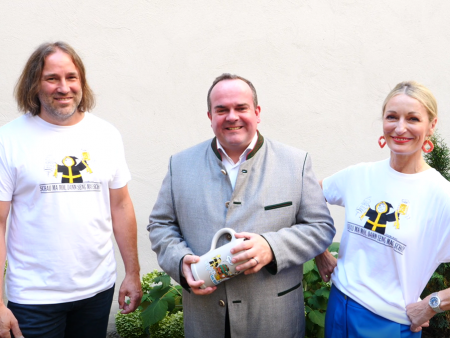 See in the video how the new donation shirt is presented by Roland Hefter, the City of Munich's Oktoberfest chef Clemens Baumgärtner and popular comedian Monika Gruber.

Video: This is the "Koa Wiesn" shirt