Farewell to a Oktoberfest legend

For decades, Otto Schwarzfischer set the pace in the Schottenhamel festival tent - and brought a real atmosphere to the beer tent with songs like "Country Roads" or "Alice". At the Wiesn 2019, he was still conducting at the traditional concert. Now the Oktoberfest legend has died at the age of 81. An obituary.

Christian Schottenhamel: "Everyone loved his music! And we loved Otto!"

Without Otto Schwarzfischer, who conducted the Schottenhamel festival tent's Oktoberfest band for decades, the Wiesn would not be the way we know, love and miss it. He brought modern music and the typical Wiesn atmosphere to the Schottenhamel Festhalle and the other beer tents.

Christian Schottenhamel himself tells us what that was like:

"The music of Otto Schwarzfischer has musically shaped not only the Schottenhamel festival hall, but the entire Oktoberfest. As the youngest Wiesnwirt, then 27 years old, he asked me in my first year whether he could also play medleys with hits. He didn't always want to play only classical brass band music. What came was the duck song or "Live is life" and many other popular hits that you had to join in with. The mood brought the youth in our tent. Everyone loved his music! And we loved Otto! The oldest band in the oldest tent of the Oktoberfest - with the most modern music. That was 30 years ago and shall remain so!" 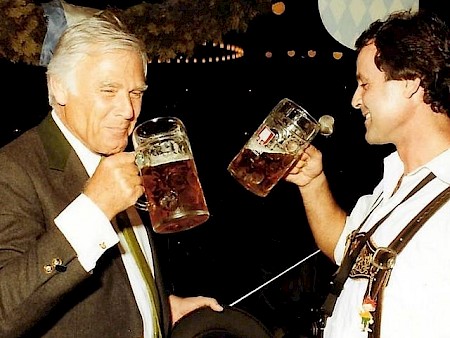 Country Roads, Alice and the celebrities

Otto Schwarzfischer did not only love music, but studied it - clarinet, piano and arranging at what is now the Richard Strauss Conservatory.

For 50 years he led the Oktoberfestkapelle Otto Schwarzfischer - and was proud of not having missed a single day. And he did so at over 200 performances a year, for the band performed not only at the Wiesn, but also at many other folk festivals.

Otto Schwarzfischer rarely relinquished the baton - except for children and celebrity visitors such as Blacky Fuchsberger or Thomas Gottschalk. 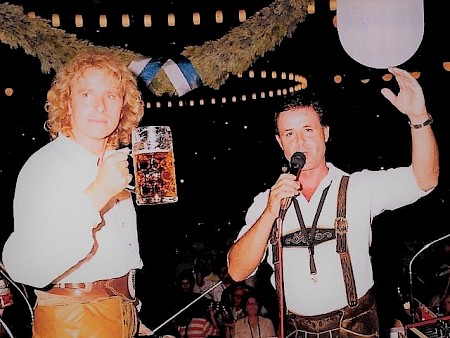 Christian Sachs: "He was our idol – as a musician and a human"

In 2010, the then 72-year-old went into retirement and handed over the baton to Christian Sachs, who had already been a member of the Schwarzfischer band since 1988 as a trumpeter and singer. Otto Schwarzfischer was a frequent guest at the Wiesn - most recently at the Wiesnwirte concert at Oktoberfest 2019, where he conducted a march together with Christian Schottenhamel - free-handed, full of joie de vivre, and without a baton, because he had previously put it in the flower decoration. In our video you can enjoy the last performance of the Wiesn legend again.

Christian Sachs mourns together with the Schwarzfischer band one of the last of his kind: "As a student, I admired Otto when I saw him with his band performing at the Augsburg Plärrer. And later, when I played in the Oktoberfest band myself, he was both a role model and mentor for my colleagues and me. The disciplined way of life that is needed for this profession as a musician is something he always exemplified for us."