(September 6th, 2021) Creativity for a good cause: In 2021, songwriter and city councilor Roland Hefter and cartoonist Dieter Hanitzsch will also be bringing a second mug in addition to the official mug of the state capital of Munich. What the "Koa Wiesn" mug looks like this year and what it's all about.

Video: All information about the "Koa Wiesn" mug 2021

Special times require special actions! After 27,700 euros were collected last year for the Munich showmen and market merchants, the surplus of the sales of the "Koa Wiesn" jug in 2021 will go directly to musicians and bands who would normally have been booked for this year's Oktoberfest.

Last year, singer-songwriter and Munich city councilor Roland Hefter came up with the idea of using the alternative Oktoberfest collector's mug to support those who had no income after the Oktoberfest was canceled. 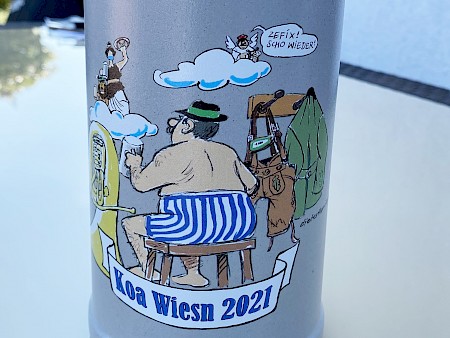 Not only did the idea fail, but also the design. In 2021 the "Koa Wiesn" mug will again be adorned with drawings and caricatures by the well-known draftsman and caricaturist Dieter Hanitzsch, who this time brings a Wiesn musician and his instrument with a wink in connection with the failure of the Oktoberfest. “I would not like to make a third mug,” says the artist.

Limited edition: Where to buy the "Koa Wiesn" mug

City councilor Roland Hefter and economic advisor Clemens Baumgärtner also agree: "We hope that this second" Koa Wiesnkrug "will be the last of its kind."

If you want one of the special collectibles on the shelf, you should be quick: In 2020 the jugs were sold out extremely quickly. The official "Koa Wiesn" mug is sold exclusively in the shop at oktoberfest.de - in collaboration with Andreas Greipl from the Bavariashop. For 50 euros you not only get a unique beer stein, but also do a lot of good to those who have no income after the Oktoberfest has been canceled.