Learn Oktoberfest secrets on virtual guided tours (only in German)

Even if the Oktoberfest can't take place in 2021, there's something we can do about the longing for the Oktoberfest. Eight top-class Wiesn insiders talk from the inside. You can be part of it: Book a virtual tour with expert Wiesn guides and guests such as the Wiesn boss himself, Wiesn innkeepers and fairground legends. Showman legend Manfred Schauer from Schichtl opens his virtual Varieté for you on 29.9, the tour is in German.

How do the online tours of the Wiesn work and who is on them?

At the beginning of each tour, which takes place via Zoom Meeting, the guest guides Grit Ranft and Birgit Stempfle, who are experts on the Oktoberfest, provide a glimpse behind the scenes of the world's largest folk festival. A very special guest is then connected live to the respective topic, talks about himself and his job - and answers questions. What's it all about? Of course, it's about the construction and planning of the Oktoberfest, the carnies and the Oktoberfest innkeepers, the music of the Oktoberfest bands and the traditional costume parade.

Who is involved? Wiesn boss Clemens Baumgärtner is an expert, the innkeepers Peter Inselkammer and Christian Schottenhamel answer questions, the junior boss of the Ferris wheel Sebastian Willenborg, Manfred "Schichtl" Schauer and other guests. 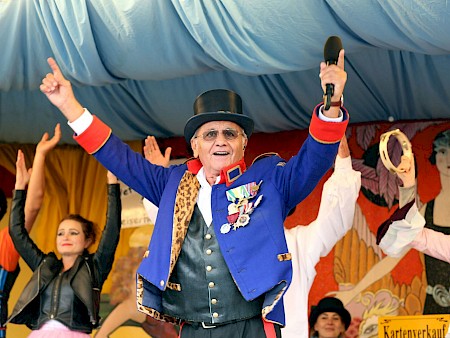 „Auf geht’s beim Schichtl!“ That's all you really need to say to Oktoberfest fans, because everyone immediately has the iconic variety show in mind, in which Manfred Schauer draws the audience in almost magically with his snappy sayings. This year, unfortunately, that won't happen, but fortunately you won't have to miss out on all the fun: Schauer, who has been running the Schichtl since 1985, is waiting for you on Wednesday, September 29, for a virtual tour (in German) of the Oktoberfest.

To call the Schichtl iconic would be an understatement, because the variety show has been on the Theresienwiese since 1869, i.e. for over 150 years. And ever since, it has been spreading its macabre charm there, because the highlight of every single performance is the beheading of a guest from the audience. No real harm is done to the guest, of course, but this somewhat morbid humor has made the Schichtl an absolute institution over the decades, and today it is impossible to imagine the Oktoberfest without it.

It was therefore quite a challenge for Manfred Schauer when he took over the Varieté. After all, the show had to be carefully modernized without losing its traditional charm. He succeeded brilliantly, and today Manfred Schauer is a showman legend in his own right. For sure, after almost 40 years at the Oktoberfest, he has a lot to tell and if you have any questions, you don't have to fear decapitation.

So let's go to the Schichtl: Take part in the virtual Wiesn guided tour! 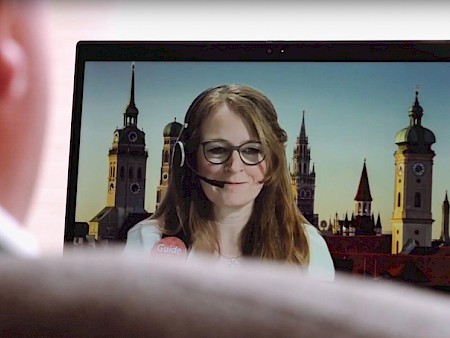 Dates and topics: The program of the virtual Wiesn tours

Go on a Oktoberfest tour with us: Book the virtual live tours here!

With the limited number of participants (30), exclusive ambience is guaranteed and Wiesn fans will get their money's worth. The 75-minute virtual tour costs 15 euros for a terminal to share with family and friends.

Information and booking at www.einfach-muenchen.de/virtuelle-oktoberfestfuehrung