Beer tasting for the Oktoberfest: It tastes this good 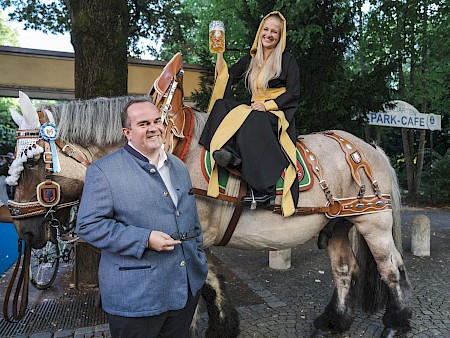 The Oktoberfest beer: The brewers present their work

Oktoberfest beer is a great and special tradition: it is produced especially for the Oktoberfest by six Munich breweries, and only these are allowed to supply the innkeepers on the Theresienwiese. On September 8, Munich's Oktoberfest innkeepers, representatives of the breweries and the city were allowed to taste the beer for the first time at the Park Café.

It is also traditional for the brewmasters to present their work in person each year at the Oktoberfest beer tasting. This year these were Andreas Brunner (Augustiner), Sebastian Utz (Hofbräu), Rainer Kansy (Hacker-Pschorr), Bernd Kräußel (Löwenbräu), Christian Dahncke (Paulaner) and Friedrich Geiger (Spaten). The brewmasters took turns presenting the merits of their product while the guests enjoyed the beers under the expert advice of sommelière and brewmaster Marlene Speck. The evening was hosted by Andreas Steinfatt, Chairman of the Association of Munich Breweries.

Oktoberfest boss Clemens Baumgärtner was, of course, present at the beer tasting and brought along the Münchner Kindl Veronika Ostler. The Economics Officer was supported by Second Mayor Katrin Habenschaden and Wiesn City Councilor Anja Berger. 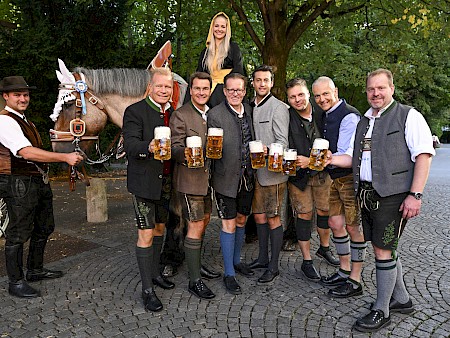 The competition for the best Oktoberfest beer is tough, but fair and (officially) not taken very seriously. People know and appreciate each other, and after all, the six traditional breweries together represent the world-famous Oktoberfest. The prerequisites for Oktoberfest beer are all the same: each brewmaster uses Munich deep water and the same ingredients and old recipes. The strict Munich Purity Law of 1487 applies inexorably. The strong and quaffable beer must have an original wort content of 13.6 percent and shimmer golden yellow.

High quality, a brilliant look, fine foam and tangy freshness - these are the hallmarks of the "Oktoberfest beer" brand. And yet there are subtle differences thanks to the skillful use of hop varieties and the experience of the "tamers of the yeast." Thus, this season's six Oktoberfest beers once again have their own unique colors, aromas and character, because if everything tasted the same, it would be bland again. Connoisseurs have discovered and tasted something special in each beer. Lovers of Oktoberfest beer can look forward to this season.

Did you already know? These are the specifications for Oktoberfest beer

Breweries: Oktoberfest regulations specify the six breweries - Augustiner, Hofbräu, Hacker-Pschorr, Löwenbräu, Paulaner and Spaten.
Strength: The festival beer must have an original gravity of at least 13.6%
Characteristics: Golden yellow, drinkable and full-bodied
Features: Original wort percentage, alcohol content, bitterness and color.
Austerity: The Munich Purity Law of 1487 applies
Depth: The water comes from Munich deep wells, which reach into layers of the Tertiary period
City: Brewing is only allowed in the territory of the city of Munich