The Oktoberfest 2022 is as popular as ever, even after the two-year Covid break. Despite the cold weather at the start of the Wiesn, showmen and gastronomers are satisfied with the half-time numbers. 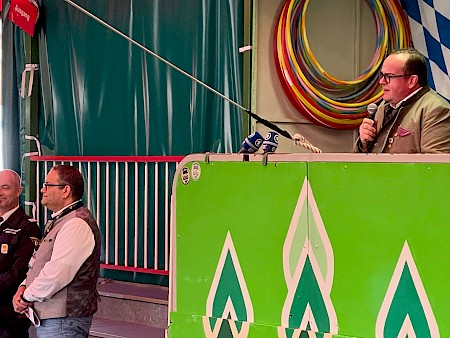 Oktoberfest 2022: Around 3 million guests so far

The 187th Oktoberfest got off to a slow start on the first few days due to the autumnal weather, which was accompanied by low temperatures and lots of rain. Nevertheless, around 700,000 guests were counted on the first weekend. The guests mainly headed for the gastronomic establishments, while there was still little activity on the streets of the fairgrounds and in the showmen's stores. From Wednesday, the fifth day, the sky above the Theresienwiese showed the Bavarian colors. The Oktoberfest got off to a flying start, as it is known, and attendance picked up considerably.

According to estimates by the festival management, 3 million guests (2019: 3.3 million) came to the Theresienwiese up to and including Sunday. Of these, around 100,000 visitors were counted at the Oidn Wiesn on an extrapolated basis (2019: 250,000). A lot of English can be heard on the streets of the festival grounds, especially from tourists from the USA. The showmen and restaurateurs are satisfied with the course of business so far and with the atmosphere on the festival grounds.

Clemens Baumgärtner: "The restart has succeeded"

Wiesn boss Clemens Baumgärtner, the head of the Department of Labor and Economic Affairs, sums up the first week: "The Wiesn is happening! Any fears that people might be estranged from the most beautiful festival in the world after a two-year break have proved unfounded. Guests from Germany and abroad are delighted with a relaxed yet hearty Wiesn. The restart has been a success."

The event, which had to pause twice due to the Corona pandemic, is not being affected by Covid-19. Neither the security services, nor the police, the ambulance service, the showmen nor the gastronomic businesses have experienced any Corona-related restrictions or cancellations. 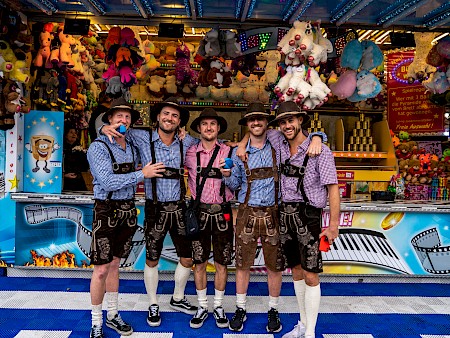 The Wiesn audience is younger overall in 2022 • Photo: Anette Göttlicher

The trend toward quality enjoyment continues in 2022. Demand for regional products remains high. Guests appreciate the transparency in the origin of the food used. The ever-increasing range of vegetarian and vegan dishes is in the same high demand as in 2019. The landlords report a decline in beer consumption of around 15 percent.

The audience is younger overall this year, they say.

While the rides were underutilized on the first four days, business picked up significantly on Wednesday due to better weather. Historical rides were tried out as well as high-tech carousels. Many families with small children were seen at the Oidn Wiesn in particular. There, the demand for nursing and diaper-changing rooms for the youngest Wiesn fans was also remarkable, he said. Overall, a mixed audience of all ages is observed.

The restaurateurs, as well as the carnies and market traders, are having a hard time with the voluntary renunciation of the heating of the beer gardens. Because of the cool weather, not only the waiters and waitresses in the beer gardens suffer, but also the stalls located in the side streets adjacent to the beer gardens. There the usual public traffic is missing, the stalls there complain about loss of sales.

Due to the cold weather, warming delicacies such as roasted almonds or bratwursts were in great demand during the first days of street sales. 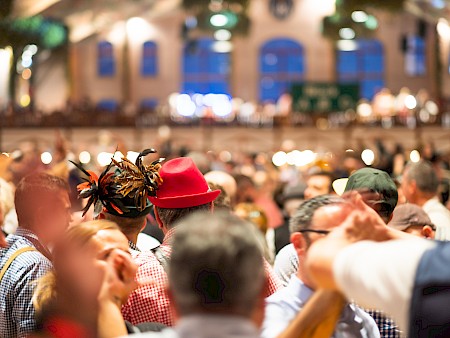 The police speak of a peaceful atmosphere at the Wiesn. • Photo: Anette Göttlicher

The police are very satisfied with the course of the Oktoberfest so far. They praise the peaceful atmosphere and the good cooperation of all security forces as well as the Safe Space for Women.

The Aicher Ambulance also speaks of a calm course, which is reflected in the decrease in operations by 30 percent as well as a lower number of removals. These have dropped from 9 percent to 6 percent of patients served. The increase in capacity and the provision of the night watch, known as "Hotel Aicher," have already proven effective. "We are happy when we have fewer services to attend to, because then the Oktoberfest visitors are fine," said Michel Belcijan, operations manager of the Aicher ambulance station. A total of 2603 patients were treated by early Sunday morning (2019: 3577).

About half of all medical treatments at the ambulance center were alcohol-related. Surgical emergencies took the second largest share. The causes here were often inappropriate footwear or the one or other gait unsteadiness after leaving the festival tents.

The fire department also reported a calm course of events.

The Wiesn lost and found office counted 1,045 items of lost property by Sunday (2019: 1,370), including 195 items of clothing, 140 IDs, 130 bank cards, 160 wallets, 75 keys, 145 cell phones or smartphones, 50 pieces of jewelry and 5 cameras. Exotic lost and found items include a Wiesn heart with a handwritten love message, two wedding rings, a snare drum and a vocational training contract. Some people probably left the Wiesn without footwear, as ballerinas, black pumps, rose-gold high heels and a pair of expensive sports shoes were handed in. His thirst had probably otherwise quenched a guest, who is missing a black backpack with 15 cans of beer.

On the subject of stein theft: around 55,000 beer steins, the same number as in 2019, have been collected by stewards so far.

The food monitoring department inspected 385 establishments as well as 166 belly stores. The food establishments are inspected several times a day with regard to proper operational, product and personnel hygiene as well as labeling. Early inspections are also carried out with regard to the proper delivery of goods (functioning refrigeration, cleanliness). The problems encountered with one marquee in the first few days have since been eliminated during ongoing operations.