Oktoberfest 2022 is coming to an end - and despite the rather mixed weather, those responsible, festival hosts and showmen are satisfied with the 187th Oktoberfest. Here is the preliminary final report with all the facts and figures:

The 187th Oktoberfest attracted a relaxed, good-humored and young crowd, despite the almost continuously wet and cold weather. Nevertheless, the mood on the festival grounds was good. The guests mainly headed for the indoor establishments, first and foremost the gastronomic ones. As soon as the weather improved just a little, the streets and the carnival stores immediately became much busier. 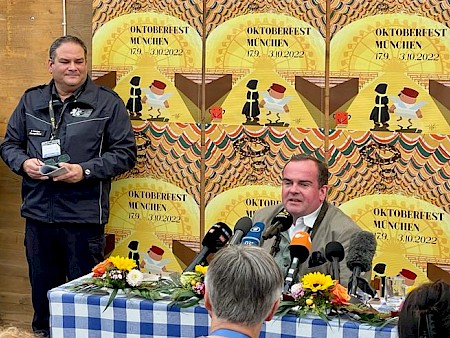 "The Oktoberfest is back!"

The speaker for labor and economy, Oktoberfest boss Clemens Baumgärtner: "The Oktoberfest is back. Guests in the seven-digit range have celebrated their Oktoberfest and shown how much they care about it. Despite all the bad news, people want their freedom and fun back. For this, the Wiesn was a powerful demonstration." 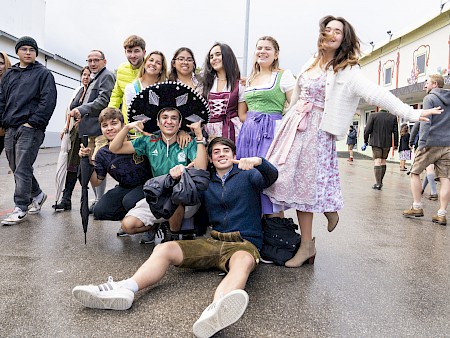 Guests from all over the world

There was a lot of English on the streets of the festival grounds, especially from tourists from the USA, but also from Scotland and England. Guests from Italy, France, Spain, Portugal, Argentina and Eastern European countries such as Croatia or Ukraine also strolled around the grounds, testing the rides and, of course, the Wiesn beer. An analysis of the mobile phone data supports the figures of the festival management, which show the Oktoberfest to be a Bavarian festival. It also confirms the assessment of the authorities as well as of the exhibitors that the audience at the Wiesn has become significantly younger.

Organizers are satisfied with the course

The logistics of Oktoberfest, which had to pause twice because of the Corona pandemic, were not affected by Covid-19. The infection did not lead to the feared staff shortages. Overall, the festival management, showmen and women, market traders and innkeepers are very pleased that the Wiesn 2022 could take place. They are satisfied with the course of the festival. 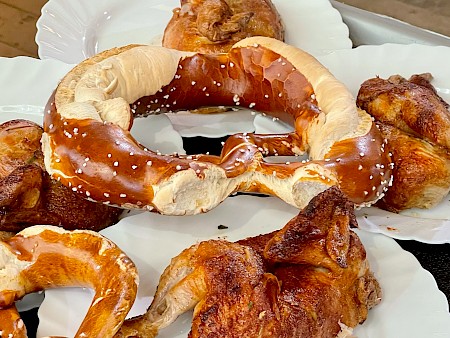 The trend toward quality enjoyment continued to the end. The innkeepers noted that their guests come to the tent specifically because of the good cuisine. They attach great importance to quality and are prepared to pay more for it. Organic food, regional products, vegetarian and vegan specialties are increasingly in demand. Kässpätzle is about to overtake roast pork. Street sales were only satisfactory on the days that were not completely rainy. Classics such as bratwurst and roasted almonds were particularly popular. Due to the cold and wet weather, mulled wine was served at the ice cream stands in the second half of the Oktoberfest for the first time since 2008. According to the breweries, Oktoberfest guests drank a total of 5.6 million liters of beer (2019: 7.3 million). Hardly any guests could be served in the beer gardens due to the bad weathe

Give me the jugs 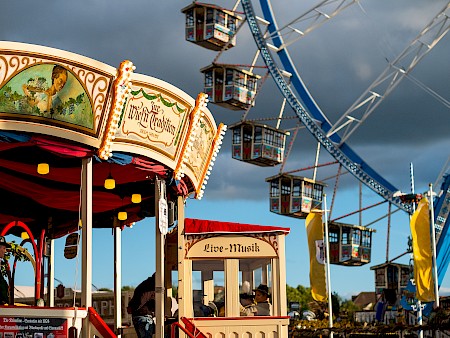 The miserable weather clouded the balance of the showmen and women, even if they were happy to be able to stand at the Wiesn again. However, as soon as the weather improved a bit, business also picked up immediately and many families, also with small children, came to the Oktoberfest. The three cohorts of youngsters, who were on the fairgrounds without parents for the first time, had a lot of fun trying out the wild rides. 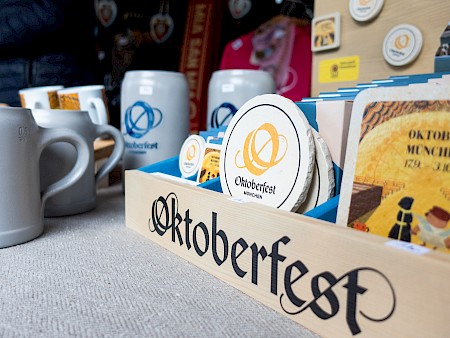 In the case of souvenirs, as with food, it is clear that guests attach great importance to high quality and are also prepared to spend more money on them. Both the official collector's mug with this year's poster motif and the Maßkrug with the new logo sold very well. Otherwise, warming items such as scarves, hoodies and socks were particularly popular. 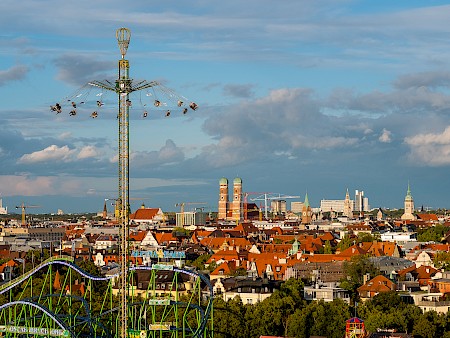 During the entire period, there was sufficient accommodation throughout the city in all price ranges and categories. There was no need to move to the surrounding area, let alone to the more distant surrounding area, as was still the case in 2019. This is also due to the increased supply of hotel rooms compared to previous years. Overall, the room occupancy rate of just under 79 percent was about ten percent higher than the room occupancy rate in the first half of September. At the tourist information offices and the call center of München Tourismus, most questions revolved around the Oktoberfest. The branch office at the Oktoberfest, which was set up for the first time in 2022, was also well frequented, especially by foreign guests. The travel industry was very pleased with the Oktoberfest restart. Nevertheless, the booking situation of international suppliers of travel to the Oktoberfest was still significantly more restrained than in 2019 due to the planning uncertainties (Covid, Ukraine war, air traffic).

From the service center

Security is a clear quality feature of the Oktoberfest. The police, fire department, ambulance station and all other authorities involved praised the excellent cooperation and security partnership with the private security companies and the "Safe Wiesn for Girls & Women" campaign, which offers the "Safe Space" in the Service Center.

With a comparative look at the numbers of operations at the Wiesn 2019, the number of operations by the police this year has decreased by around 9% and is thus at the level of 2018. In the reporting period, 1819 operations were processed. In addition to the lower number of visitors, the mostly rainy and cool weather may be the main reason for this. The day with the heaviest operational load was the so-called middle Oktoberfest Saturday with a total of 209 police deployments, followed by the so-called last Oktoberfest Saturday with 181 police deployments.

The Aicher medical station had 27% fewer patients at Oktoberfest 2022 compared to 2019. However, medical supplies fell by only 4% and on-site visits by only 6.6%. It is gratifying that through the daily deployment of 450 Aicher paramedics and 50 Aicher doctors, the evacuation rate could be reduced from 10% to just 6%. After 16 days of Wiesn (as of October 3rd, 2022 6:00 a.m.) we had 355 overnight patients in the so-called “Hotel Aicher” here at the Wiesn. The Aicher paramedics covered 1400 km. This roughly corresponds to the distance from Munich to Glasgow in Scotland. On average, the Aich paramedics were at the scene at the Oktoberfest in 3:55 minutes. This is about as long as singing "Ein Stern" once. "All of our innovations, from 24-hour operation to the virtual clinic clown FrédARico, the use of the IRIS telemedicine system and the CT, have been successfully implemented," says Peter Aicher, Managing Director of the Aicher Ambulanz Union. An exact evaluation will then take place after the Oktoberfest.

The food monitoring department of the Kreisverwaltungsreferat (KVR) carried out 932 food and hygiene inspections, including early morning inspections. Constant monitoring was carried out at 330 beer tents, cafés and food establishments, as well as 187 hawker stalls and establishments selling souvenirs. Food establishments were inspected several times a day with regard to proper operational, product and personnel hygiene and labeling. Early checks are also carried out with regard to the proper delivery of goods (functional refrigeration, cleanliness).87 samples of foodstuffs and consumer goods, including beer and finished meals, were taken by the food monitoring department as suspected samples and planned samples, in accordance with the requirements of the Bavarian State Office for Health and Food Safety.

By the end of the Wiesn, the Wiesn lost and found office had counted around 3,500 items, including 930 IDs, 380 items of clothing, 570 wallets, 630 bank cards, 420 smartphones and cell phones, 180 keys, 150 pairs of glasses, 70 bags, backpacks and pouches, 80 umbrellas, and 70 pieces of jewelry. Also in the second Wiesn week, some found objects inspired speculation. Did the Wiesn fan, who lost the book, "Glück gefunden"; of the Tatort commissioner Ulrike Folkerts, perhaps find his luck at the Wiesn and no longer need the reading? Did the wearer of the abandoned bathing slippers in the rain actually want to spare the new traditional costume shoes? When might the toothless Wiesn guest have noticed that he can no longer bite because his dentures are missing?

As in 2019, the Oktoberfest was supplied with 100 percent green electricity. The number of customers who also actively purchased M-Ökostrom remained at the high level of 65 percent. Electricity consumption of three million kilowatt hours was approximately 1.5 percent lower than the 2019 Oktoberfest, while water consumption of approximately 97,000 cubic meters was down 17 percent compared to 2019. 40 gas systems from the Theresienwiese supply network were supplied with natural gas. These were all large kitchens and barbecue facilities. At 133,000 cubic meters, gas consumption was 36 percent lower than in 2019. Since no garden heating systems were operated with natural gas this year, this consumption of approximately 20,000 cubic meters was completely eliminated. Likewise, there was a noticeable decrease in cooking gas. Oktoberfest consumed an average of: