Opening and tapping of the Oktoberfests 2023

16 Sep
Here's to a peaceful Oktoberfest! At 12 o'clock sharp, the 188th Munich Oktoberfest will open on September 16, 2023. Traditionally, Lord Mayor Dieter Reiter taps the first barrel of Oktoberfest beer in the Schottenhamel Festhalle. 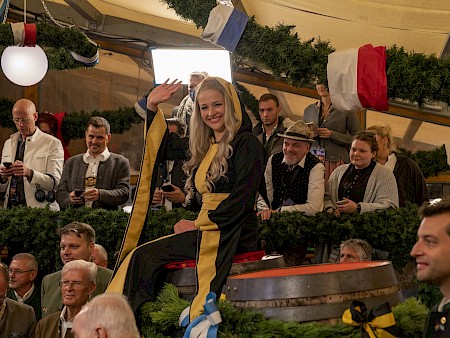 This was the tapping ceremony 2022 in the Schottenhamel-Festhalle

At shortly before 12 o'clock at September 17th Lord Mayor Dieter Reiter entered the tapping boxes in the Schottenhamel-Festhalle. As always, the crowd was huge. Everyone wanted to be there when Reiter speaks the almost legendary words "O'zapft is! To a peaceful Wiesn!". Without reservation, you had to wait since early morning in order to be able to get hold of a free table.

The Lord Mayor showed that he had not forgotten anything after the three year break: After three strokes, the Spaten beer flowed from the barrel into the first beer mug, which the mayor traditionally hands to the Bavarian Prime Minister Markus Söder. Also present (photo above, from left to right): The mayors Verena Dietl and Katrin Habenschaden as well as Oktoberfest boss Clemens Baumgärtner. Shortly afterwards, the firecrackers also signaled to the landlords of the other marquees that they were allowed to start serving beer. Cheers!

In as few blows as possible: the perfect tapping ceremony

According to long-standing tradition, the first beer barrel at the Wiesn is always tapped at the Schottenhamel festival tent. The mayor of Munich tries his hardest to insert the tap in as few blows as possible to fill up the first beer glass, which is customarily handed to the incumbent Bavarian state premier. The current record for the perfect tapping ceremony lies at two blows – the record is shared by former Munich mayors, Christian Ude and Dieter Reiter. Mayor Thomas Wimmer (SPD), who introduced the traditional tapping ceremony in 1950, needed 17 blows!

Why is the tapping ceremony taking place at the Schottenhamel?

“O’zapft is!”, comes the cry from the Schottenhamel festival hall, because it’s where the event was “officially” tapped for the first time in 1950 by Thomas Wimmer, the mayor at the time. It’s said that he hurried to the Schottenhamel for the Oktoberfest opening ceremony because he was running a little late after opening a fair at Theresienhöhe just before 12. What’s more, it was pouring with rain on this Saturday afternoon in September 1950, causing Mayor Wimmer to take the fastest route into a tent. Whether it really happened that way or it’s just a Wiesn legend is hard to say.

12 gunshots signal the start of the festival

After the successful tapping ceremony, twelve gunshots are fired in front of the Bavaria to signal to the other festival tents at the Wiesn: Oktoberfest is officially open and the beer can start flowing! Although the Wiesn tents open at 9 am on the first Saturday, beer can only be served in all the tents after the shots have been fired.

See the tapping ceremony live – first hand, on TV or via live stream