The traditional costume and hunters’ parade 2023

17 Sep
What a spectacle: Around 9,000 participants marched from Maximilianstrasse to Theresienwiese in the Trachten- und Schützenzug. Thousands of spectators did not want to miss the Oktoberfest highlight on the first Sunday of the festival. 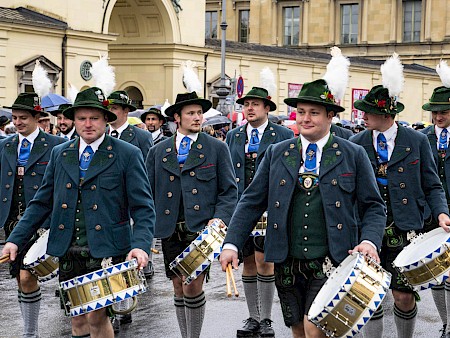 2022: From the Max II Monument to Theresienwiese

The Trachten- und Schützenzug is one of the absolute highlights of the Oktoberfest calendar and anyone who has ever watched this extraordinary event knows why. Shortly after 10 a.m., the nearly seven-kilometer-long procession gradually began to move at the Max II Monument.

The participants did not let the somewhat adverse weather conditions spoil their mood, quite the opposite: enthusiastically they showed off their traditional costumes, waved to the cheering crowd at the roadside and even performed acrobatic acts such as the Munich moriscene dancers. The musical accompaniment was provided by numerous brass bands and marching bands playing traditional folk and marching music.

As always, the Münchner Kindl, the city's mascot, rode in front, followed a little later by the first festive carriage with Mayor Dieter Reiter and his wife, accompanied by the Würmesia city guard. As on the previous day, the mayors Katrin Habenschaden and Verena Dietl shared a carriage, and Bavarian Prime Minister Markus Söder was there with his wife, as was Oktoberfest City Councilor Anja Berger.

Despite the gray skies, the Trachten- und Schützenzug was once again an extremely colorful event, with historic dirndls and lederhosen on display, as well as Biedermeier fashion and even knight's armor. The participants came not only from Bavaria, but from all over Europe, and this year there was even a traditional costume group from the USA. In between, the splendidly decorated floats of the six Oktoberfest breweries were not to be missed and, of course, thousands of Bavarian sport shooters were also there.

The pictures of the traditional costume and hunters’ parade 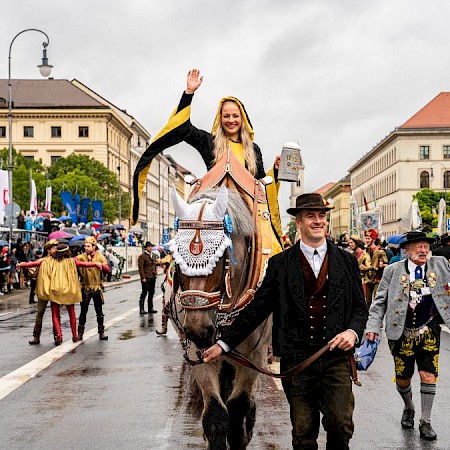 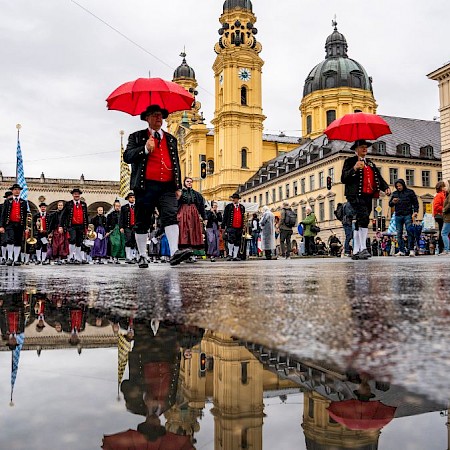 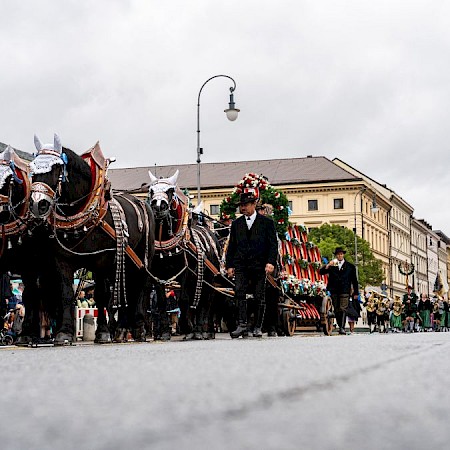 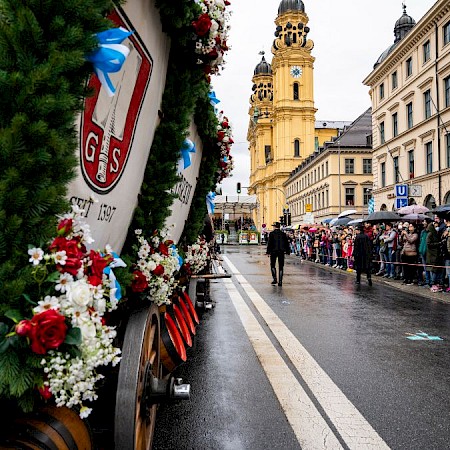 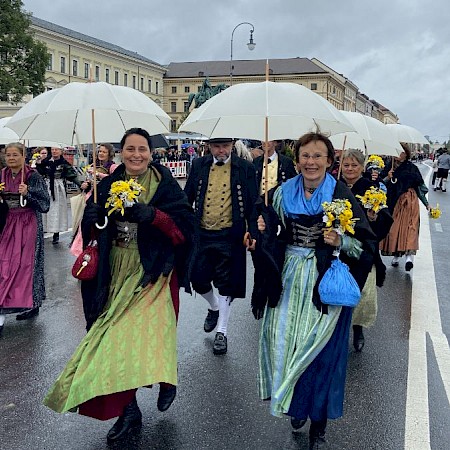 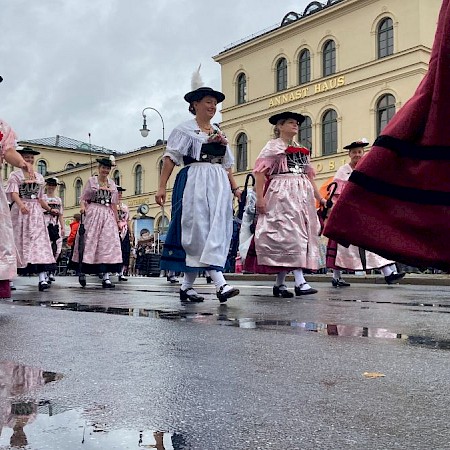 Who’s there? Customs and folk music from around the world

A better question would be: Who isn’t there? Around 9,000 participants join the festive throng in Munich and parade festively through the city in 60 groups. Not only costume wearers take part in the traditional costume and hunters’ parade: costume clubs, hunters and mountain troops, marching bands and musicians from around the world can all sign up for the parade with Festring München e.V.

Overview of all participating groups (PDF)

Which way? The route of the traditional costume parade

The Max II monument on Maximilianstraße is the starting point of the festive costume and hunters’ parade at 10 am on the first Sunday of the Wiesn. From there, the parade ambles through Munich city center towards the Theresienwiese.

Where can I watch? Tickets for spectator stands

Festring München e.V. not only determines the route that the costume parade takes through the city to the festival site. For spectators who want to experience the action up close, there are stands erected along the route that offer the best view of the parade. Note: It is advisable to arrive early as the seats in the stands are not numbered.

All the details about the route, stand locations, tickets and prices are available on the website https://www.festring.de/trachten-und-schuetzenzug/kartenvorverkauf/. Tickets are available from München Ticket GmbH as well as from all reputable booking offices.

Who is the Münchner Kindl?

Every year at the Wiesn, the official Munich mascot, the “Münchner Kindl” comes to life and leads the colorful parade to the festival site on horseback. Originally a male monk, the mascot became increasingly childlike and feminine in many depictions over the years, and is now depicted as a girl. The “Münchner Kindl” has been selected annually by the Festring association since 1972, and must be born in Munich, with parents and grandparents who are also born in Munich. By the way, the first real live “Münchner Kindl” was Ellis Kaut in 1938, author of the German children’s series, Pumuckl — although she was born in Stuttgart!