Worth knowing about Oktoberfest

Why’s the Wiesn called Wiesn? Why does it happen in September? Can I take my beer mug home? What do I do if I’m vegetarian or vegan? Are animals allowed at Oktoberfest? Answers to these questions and more about the biggest fair in the world.

Why’s the Wiesn called Wiesn? And why Oktoberfest?

On October 17th 1810 the first Oktoberfest was opened with a big horse race. This was to celebrate the marriage of Crown Prince Ludwig and Princess Therese of Sachsen-Hildburghausen. The venue was a meadow which at that time lay on the city outskirts – in honor of the bride it was renamed “Theresienwiese”. This long name became a bit of a mouthful for the Munich residents over time and so Theresienwiese turned into “d’Wiesn” – which incidentally does not come from “den Wiesn” in plural form, as it is singular, but from the Bavarian short form of “die Wiese”.

Although the Wiesn starts in September, it’s called “Oktoberfest” – the start date was moved forward in the course of time.

Can I take my beer mug home as a souvenir?

Absolutely not! The beer mug which you drink your Wiesn beer, Radler or lemonade from is and remains the property of the proprietor. Security and police won’t be amused if you try to take it with you. If you still want one as a souvenir, you can buy one at one of the many souvenir stands – it will then have a colored sticker that shows it was obtained legally. Or you can buy yourself one of the earthenware mugs with the official symbol of Oktoberfest on it.

Are animals allowed in the venue?

There are two exceptions as regards the entry of animals into Oktoberfest: The brewers’ cart horses are allowed to pull the splendidly decorated carts with the beer barrels across the venue. The second exception are guide dogs and assistance dogs.

Can I bring my bicycle to the Wiesn?

Theresienwiese is a great place to cycle or in-line skate across – but not when Oktoberfest is taking place. Roller skates, skateboards, scooters, in-line skates and bicycles are not allowed here – there are enough places at the main entrance to leave your bikes etc.

What food is available for vegetarians and vegans at the Wiesn?

Vegetarians will have no problem finding great food at the Wiesn: Obazda cheese, pretztels, radishes or cheese spätzle are on every menu. There are often vegetarian soups and, for main course, many types of vegetarian dumpling. And then dessert! The Wiesn is a real paradise for lovers of sweet pastries and strudels. Vegans have it a bit harder but they’re catered for too. In the Herzkasperl tent at Oide Wiesn for example there are six different vegan dishes on offer. And you can even find vegetarian or vegan options in the places you’d least expect: For example in the chicken and duck grill Ammer, which offers an organic “chicken” fricassee without chicken. There have even been vegan Bratwursts at the Wiesn for a few years.

Are those with gluten intolerance catered for?

Although gluten-free beer does exist for those with celiac disease, it can’t yet be found at Oktoberfest. However there are gluten-free fish sandwiches at “Monika Filsers Feinkoststandl” in Matthias-Pschorr-Straße.

Can you drink beer outside the tents?

Yes – in the many attractive small and large beer gardens by the tents and permanently-stationed drink-sellers. Unlike a normal beer garden under the chestnut trees you can be served at your table!

Does the Oide Wiesn (Old Oktoberfest) take place each year?

Every four years the Oide Wiesn takes a break and makes way for the Central Agricultural Festival, which then happens during the first week of Oktoberfest on Theresienwiese next to the main venue. The next Oktoberfests without Oide Wiesn are in 2020, 2024, 2028 and so on.

Why does the Wiesn sometimes last 16 days, sometimes 17 days and sometimes even 18 days?

A public holiday which always falls during the Wiesn is October 3rd, German Unity Day. If it falls on a Monday, the Wiesn is extended by a day and therefore lasts 17 instead of 16 days. If it’s on a Tuesday, the Wiesn ends with it and then lasts a whole 18 days. The next Oktoberfest that lasts 17 days is in 2022. And in 2023 there are 18 days of Oktoberfest fun.

Important: Non-updated information on this page refers to Oktoberfest 2019 - there was no Oktoberfest in 2020 due to the Corona pandemic. 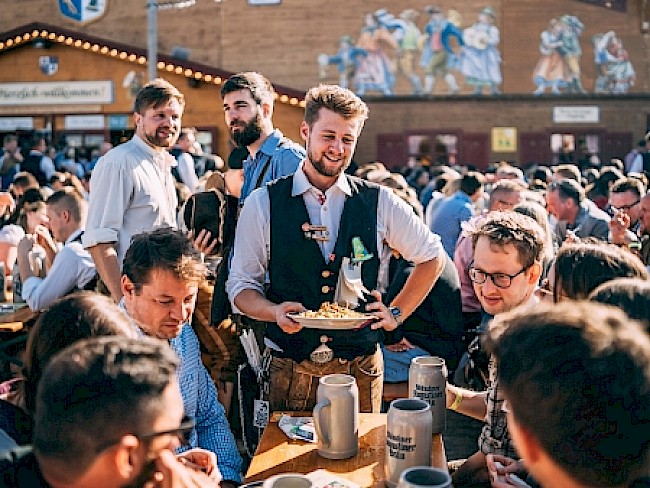