Oktoberfest has been taking place for over 200 years. Quite a few records have been set over that span of time. The most visitors came in 1985, the most beer was drunk in 1910, and the most famous custom didn’t come into being until 1950.

Beer record at Oktoberfest: Never has more been drunk than in 1910

In 1910, more beer was drunk at Oktoberfest than ever before — and to this day. A total of 12,000 hectoliters of beer were served: That’s over a million liters! The reason was the celebration of Oktoberfest’s 100th anniversary.

A sad record: The longest hiatus

From 1939 to 1948, for ten years, there was no Oktoberfest. The culprit was the Second World War. As a substitute and also as a distraction for the citizens of Munich in the post-war period, the smaller "Herbstfest" was organized at the end of the forties. Also in 1919 and 1920 only a small "Herbstfest" had been celebrated: due to the First World War. In 1949, a regular Wiesn was held again. Most recently, the Oktoberfest had to be cancelled in 2020 and 2021 due to Corona. In its history, the Oktoberfest has been cancelled a total of 26 times.

The most visitors came to an anniversary Oktoberfest: Roughly 7.1 million people visited the Oktoberfest in 1985 and celebrated the 175th birthday of the world’s largest folk festival.

The sharpest shooter on the Wiesn

Every year from 1960 to 1983, Wiesn visitor Karl Sorg portrayed himself “shooting” photos – with his rifle in his hand. How? If a hit is made in the middle of the target, a photo of the shooter is taken at this shooting gallery.

The tapping, i.e. opening the first beer barrel of Oktoberfest, is a tradition — albeit a rather young one: In 1950, then-mayor Thomas Wimmer called the famous words “O'zapft is!” (Strike it lucky) for the first time. Since then, each of his successors has probably had more respect for the tapping than for election day, because the reputation of the mayor depends on the number of strokes required. It took former incumbent Christian Ude seven blows on his first time, much to the amusement of some of his colleagues at city hall. But Ude practiced diligently, learned the right technique, and set a new record with only two strokes. His successor, Dieter Reiter, may have copied some of his predecessor’s technique. He only needed four strokes at his premiere – and has now landed at two.

The biggest tent that ever stood at Oktoberfest

The largest Wiesn beer tent of all time was the Pschorr-Bräurosl tent from 1913 which, with its 5,500 square meters, offered space for around 12,000 guests. Today, the Hofbräu-Festhalle is the tent with the largest capacity at about 10,000 seats.

Clever dogs on the Wiesn

In the year 1880, a showman with a trained family of dogs applied to perform at Oktoberfest. Allegedly, the Astrakhan spitz dogs were not only able to play cards and dance, but also recognized all the regents of Europe in photographs.

The first roller coaster in Munich

A case from the year 1901 still amazes today: Messrs. I. and M. Hager were awarded a certificate for drinking ten beers in the Lang beer stand. Not worth emulating.

Old Wiesn postcards were also used to depict children drinking beer – not only the famous Münchner Kindl, but also other toddlers. By the way, the former was male until the 1930s, when it became a girl. 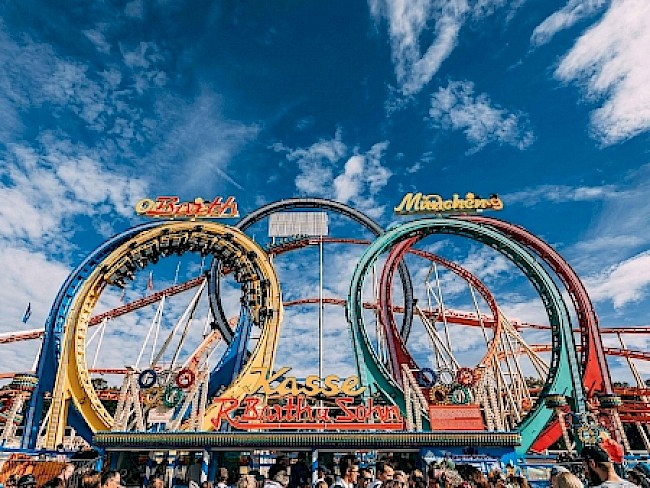