The six Munich breweries at Oktoberfest

Only beer from Munich breweries may be served on the Wiesn, as custom dictates. Already weeks before the starting signal for Oktoberfest, the breweries present their newly brewed Wiesn beer and increase the anticipation of the highlight of the year. We introduce the six breweries of the state capital allowed to fill the beer mugs of the Wiesn.

The monks of the Augustinian Order founded a brewery in 1328 that still exists today, and is the oldest brewery still existing within the Munich city limits. After privatization, Augustiner settled in Neuhauser Straße in 1817, where the Augustiner restaurant, popular with locals and tourists, is still located today. At the end of the 19th century, the headquarters and brewing facilities were moved to Landsberger Straße, where brewing continues to this day. The Augustiner Hell enjoys cult status in the bulbous half-liter bottle, with the also quite bulbous monk on the label. Oktoberfest has the 6.3% Augustiner Wiesn beer in the Augustiner festival tent, in the Fischer Vroni, and in the Tradition festival tent on the Oide Wiesn. There are also three small tents for Augustiner: the chicken and duck grill Ammer, the Wildstuben, and the Zur Bratwurst tent. The brewery is the only one still using the traditional 200-liter wooden barrels, the so-called Hirschen, for storage.

The brewery was first mentioned in a document in 1417 and was located in Sendlinger Straße, where today the restaurant “Altes Hackerhaus” is located. In the 18th century, under the couple Joseph Pschorr and Maria Theresia Hacker, it developed into Munich's leading brewery. Hacker and Pschorr were later continued by their sons as separate breweries, and have only been a common brand again since 1972. Today the brewery is located in the same premises as the Paulaner Brewery. Since 2007, the Hacker-Pschorr beer is sold again in the traditional bottles with swing stopper and “Plopp.” The beer at Oktoberfest, at 6.0%, is available in the Hacker festival tent, the Pschorr festival tent Bräurosl, and in the Herzkasperl festival tent on the Oide Wiesn. The Fisch Bäda, the Heimer duck and chicken grill, and Poschner’s also offer Hacker-Pschorr. 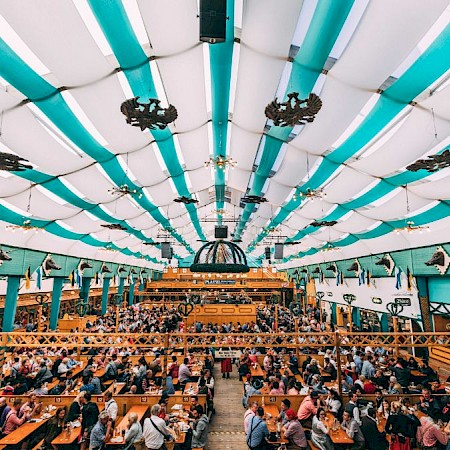 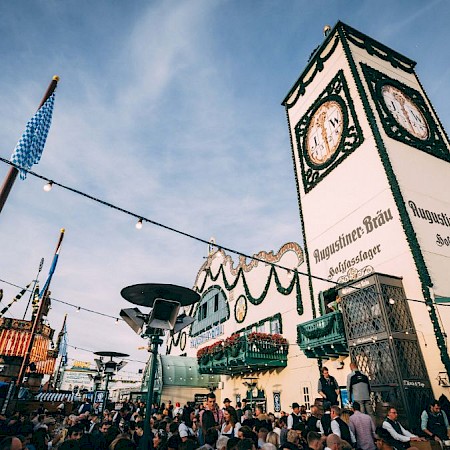 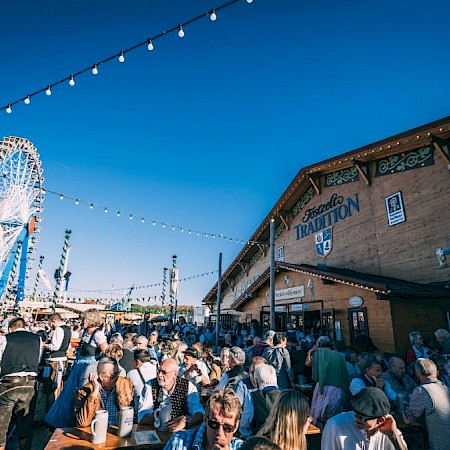 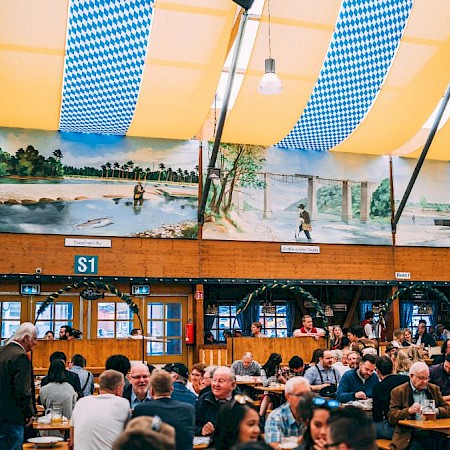 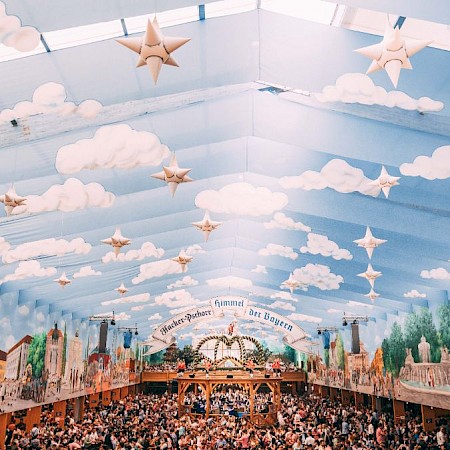 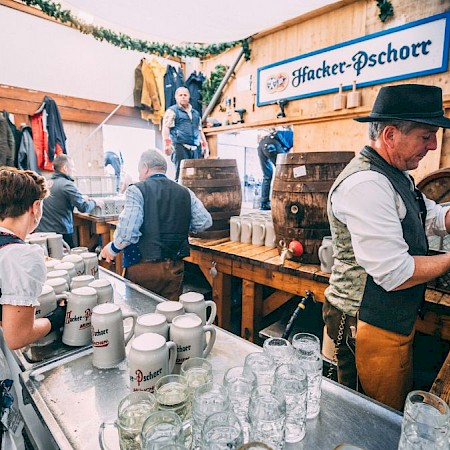 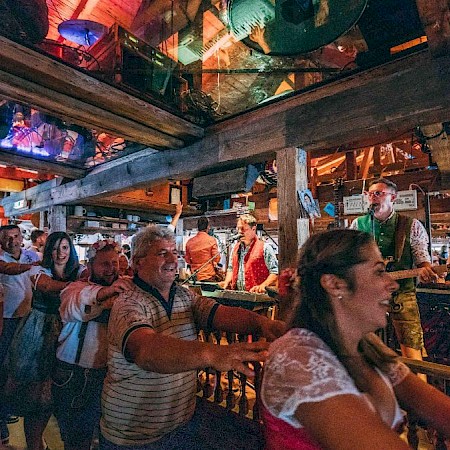 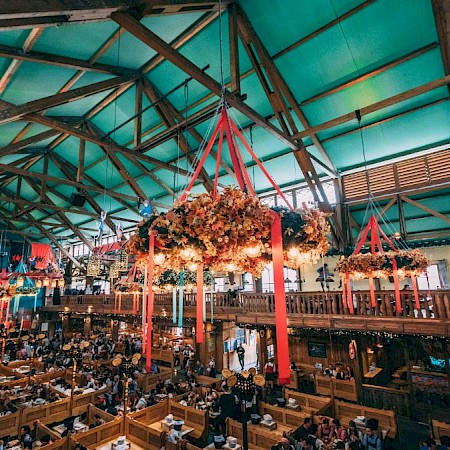 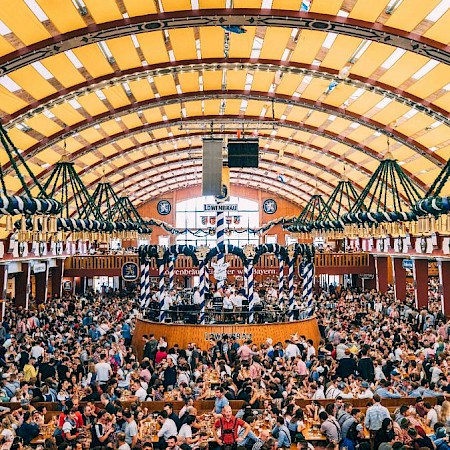 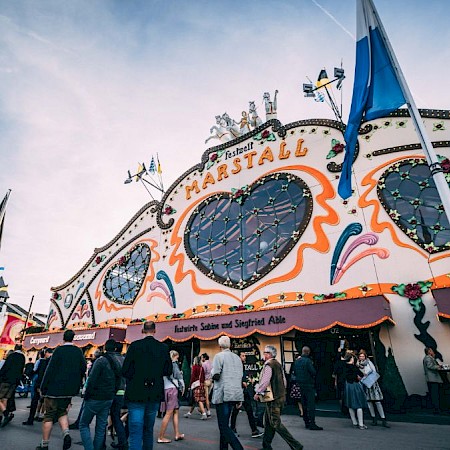 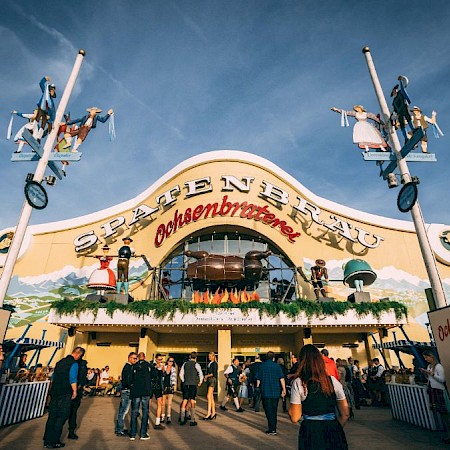 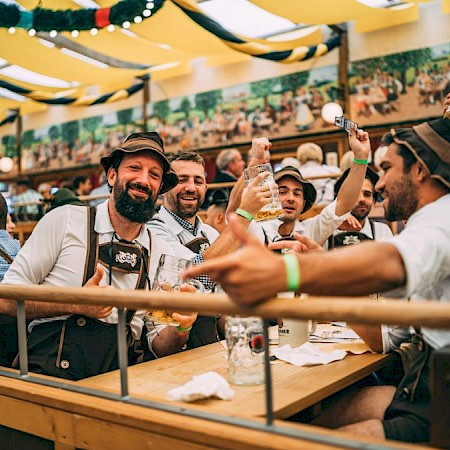 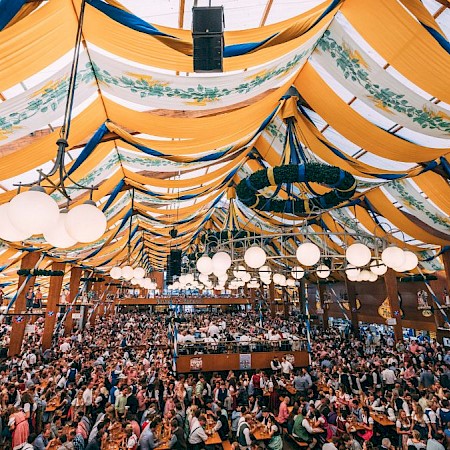 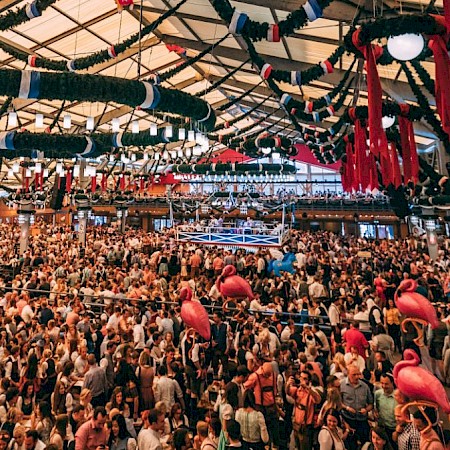 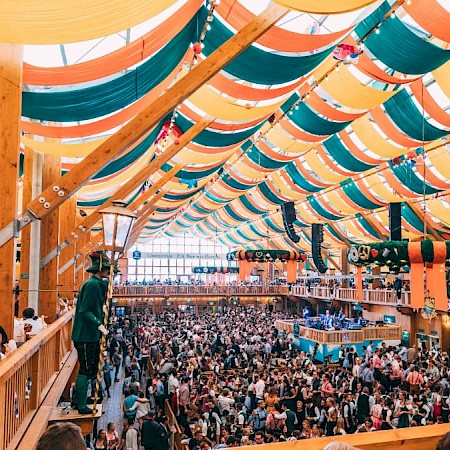 Hofbräu: The beer from the world-famous Hofbräuhaus

There is a Hofbräuhaus in Munich... In 1589, Hofbräu was founded under Wilhelm V as a ducal brewery, and the company has been run as a state-owned enterprise since 1939. The brewery was originally located in the middle of the city, where today the Hofbräuhaus am Platzl is one of Munich’s main tourist attractions. In the 19th century, due to lack of space, the company moved to Innere Wiener Straße, where the Hofbräukeller with one of Munich’s most beautiful beer gardens is still located today. Since the late 1980s, brewing has been carried out in Munich-Riem. At 6.2%, Hofbräu is the second-strongest of the Oktoberfest beers and is served in the Hofbräu tent.

The brewery probably began in the late 14th century, but the name Löwenbräu first appeared in the Munich beer brewing index in 1746. In the 19th century, the medium-sized company under the Brey family developed into the largest brewery in Munich and, due to its strong growth, moved to Nymphenburger Straße, where it is still located today. The Löwenbräukeller and its beer garden are famous for spectacular events such as Stout Beer Festivals or the Night of the Tracht. Since 2003, the Spaten-Franziskaner-Löwenbräu Group has belonged to the international brewing group InBev. The brand logo is of course a lion, which looks quite similar to the Bavarian heraldic animal. Every Oktoberfest visitor will also recognize the giant lion in front of the Löwenbräu festival tent, roaring “Löööö-weeeen-brääääu” and drinking beer, calling the thirsty onlookers towards him. The Löwenbräu-Wiesntrunk, at 6% alcohol, is also available in the Schützen tent and in the small Haxnbraterei.

The monks of the Paulaner Order served their first beer of their own in 1634, making Paulaner the youngest of the Munich breweries. At first, Paulaner beer was only served publicly during festivals; otherwise it was reserved for the monks. But soon the bock beer, based on a recipe by Brother Barnabas, enjoyed great popularity among all Munich beer drinkers. For a long time, the brewery’s head office was the Giesinger Nockherberg, in whose restaurant the annual Starkbierfest with the famous Politician Roast (teasing) takes place. Today, the breweries are located in Munich-Langwied. The Oktoberfest beer from Paulaner has 6% alcohol and is served in the Paulaner Festzelt, the Armbrustschützenzelt, the Käfer tent, the Kuffler’s Weinzelt (as wheat beer until 9 p.m.), the Heinz sausage and chicken grill, the butcher Stubn, the Munich Knödelei, and the Münchner Stubn.

Spaten: Inventor of the “Münchner Hell”

The Spaten brewery was founded in 1397 and was located in Neuhauser Gasse for its first few centuries. The brewery moved to Marsstraße in the 19th century, where at least the administration is still located today. Spaten deserves the honor of being the first brewery to bring the “Münchner Hell” (Munich Pale) to market in 1894 — a true bestseller to this day. Since 2003, the Spaten-Franziskaner-Löwenbräu Group has belonged to Interbrew, today InBev. Spaten and Franziskaner beer is available at Oktoberfest in the Schottenhamel tent, where the mayor of Munich also celebrates the first tap every year. There’s also Spaten beer in the Marstall, in the Ochsenbraterei, at the Glöckle Wirt, at the Goldenen Hahn, in the Kalbsbraterei, and in the Wirtshaus im Schichtl; you can drink Franziskaner wheat beer in theFeisinger’s Kas- und Weinstubn. The Oktoberfest beer has 5.9% alcohol.

Important: Non-updated information on this page refers to Oktoberfest 2019. There was no Oktoberfest in 2020, neither was in 2021 due to the Corona pandemic. 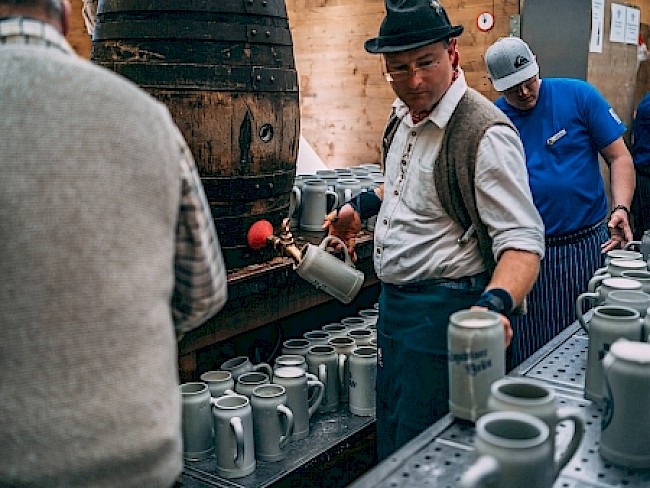 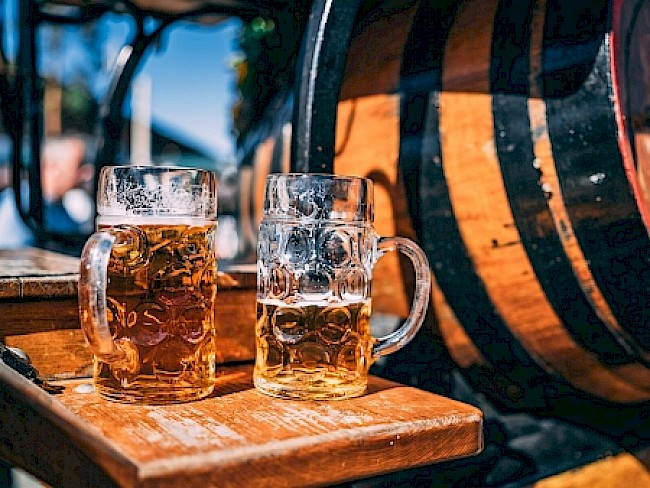 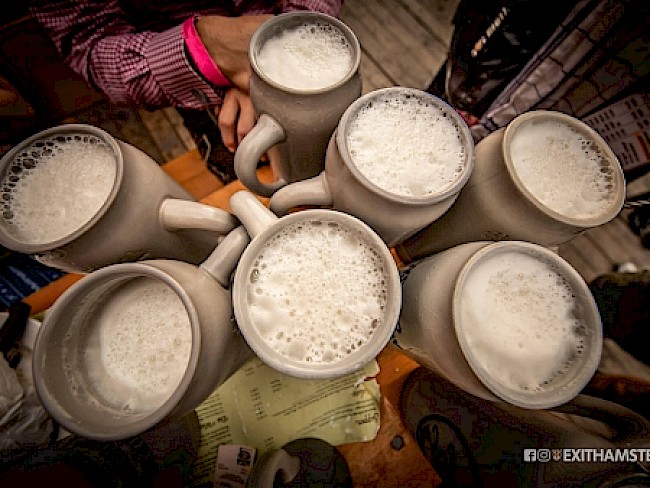